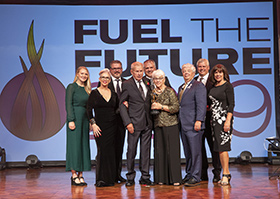 The induction process began with a noon ceremony to present the coveted Hall of Fame pin to inductees at the Furniture Plaza building. Nearly a hundred of the industry’s top names gathered to take part and witness the event. Each inductee was pinned by an existing Hall of Fame member. Felix Wright, former Chairman/CEO of Leggett & Platt, was selected as the individual to honor Lange with his pin. The inductee plaques on the Wall of Fame were uncovered and bronze bricks were dedicated that are permanently placed in the ‘Walk of Fame’ along the sidewalk on Main Street in front of the Furniture Plaza building.

The Induction Celebration, the industry’s most prestigious event, was held at the Sheraton Greensboro Four Seasons. “Miracle on the Hudson” Captain Sully Sullenberger delivered an inspiring keynote address on leadership during the 2019 Fuel the Future Induction Celebration. TV personalities Bobby Berk and Kelli Ellis served as hosts along with entertainment from saxophonist, singer and songwriter Grace Kelly. It was here that Lange was introduced with a remarkable video highlighting his career. His granddaughter, Janae Lange-Wendholt gave a touching  acceptance speech on his behalf.

“This year’s inductees represent the best of the best in our industry as a result of the work done by a dedicated Selection Committee, which is committed to thoughtfully and thoroughly researching candidates from across the industry,” says David Gebhart, president of the Foundation board of directors. “The inductees’ contributions are impressive and each has put their own mark on the industry and is worthy of receiving the industry’s most prestigious honor.”

A seven-member selection committee, composed of Hall of Fame Foundation board members and representatives from diverse segments of the industry, chooses inductees based on their contributions to the growth and development of the home furnishings industry in America. The committee uses a points-based evaluation system grounded on four foundations: enduring excellence, superior accomplishments, innovation and creativity, and philanthropic generosity. Ken Fulp, CPA, with the Foundation’s accounting firm Sharrard McGee & Co., verified the results.

“Induction into the Hall of Fame is the home furnishings industry’s highest honor,” Gebhart says. “Our new honorees represent innovative approaches to retail and domestic manufacturing as well as high-end design and global sourcing,” he says.

Clement “Clem” M. Lange, chairman of Best Chairs, Inc./Best Home Furnishings, built the domestic upholstery manufacturing company on the principal to create the best quality product at the most affordable price and to do it more efficiently than the competition. With more than 2,400 styles and options in more than 800 fabrics and leathers, orders are produced in five working days. A technology leader, Mr. Lange computerized manufacturing operations in the 1970s. In the 1990s, a new high-tech computer system and the launch of Best Chair Transit further shorten deliveries of its swivel rockers and gliders; stationary and motion sofas, loveseats and chairs; upholstered benches and occasional tables.